Every once in a while one of my little camera gear schemes pan out. This would be one of those times. This particular pairing played out over the course of a couple of years. I’ll start with the lens.

Fought it for quite a while but I fell for the Sigma 45mm f/2.8 when it was released.

It was a strong performer with impressive features for sure but its looks are what really set it apart if I am honest. It looks so good that it almost made the fine performing but admittedly generic faux DSLR shape Sony A7III look good…

…and during that first test run I really liked how this lens rendered in my first test shots.

But I did not buy the lens then. Feeling I needed a defined reason I settled on the following objective conclusion:

Later after further consideration I pieced together the real reason and it was more subjective. With its all metal build and almost Leica lens like rangefinder aesthetic this is a lens that would be a much better fit for a compact or rangefinder-ish full frame camera. The problem is that no such camera existed within the available DSLR design L Mount and FE camera landscape when this lens was released. So basically it was a lens without a camera.

You would have thought that the Sigma fp would be the go to camera since they were released at the same time. Perfect right? Sigma evidently thought so since this is the only lens available as a kit with the fp.

This is it then. “The” camera for the Sigma 45mm f/2.8 right? It is full frame. It is tiny. I always wanted to have a Sigma camera. Let’s light this puppy. Add to cart and… Wait. Hold on. Spec sheet says what now?

Nope. This may be a perfect cinephile solution and an excellent base for a video rig but it leaves a lot on the table for photography. So no Sigma 45mm f/2.8 for me yet.

Then Sony announced the A7c and the rumors did nothing for me. Some websites even indicated that, like the fp, the A7c might not have an EVF, might have a pop-up EVF a la Sony RX cameras (I do not like these), or might require an add on EVF (I do not like these). Then it was released and, while it did have an EVF, at first the spec sheet left me wondering what separated it from the A7II I already had. But upon a closer look I realized that was the wrong question. Other than reducing the size the proper question was what did they add. Sony either purposely or (doubtfully) inadvertently combined the best of a few cameras I wanted and/or already owned into one camera.

So Sony effectively created a better stills camera for the Sigma 45mm f/2.8 than Sigma managed to do. For me the Sigma 45mm is a much better functional and aesthetic pairing for the A7c than the 28-60mm kit lens.

Why did I devote a whole post to this? First off look at it.

I love the way this camera and lens look and feel together.

I appreciate the level of detail they put into this lens. It has the nicest metal lens hood I have ever seen or held. Period.

It is like they designed them to work with each other. Sure there are smaller and lighter primes that fit the A7c’s small size well like the tiny Rokinon/Samyang 24mm f/2.8…

…but the (relatively) bland plastic feature free build is better suited to the faux DSLR design of the more traditional A7 models. Given my options I will always go for the more pleasing tactile feel of the Sigma 45mm f/2.8. Or at least that was the theory. Only one way to test this out.

Let me back up. The next thing I did after pre-ordering a Sony A7c was to jump on (a lightly used from KEH) FE mount Sigma 45mm f/2.8. While waiting I used the lens with the sensor twin A7III and it was every bit as good as I expected. 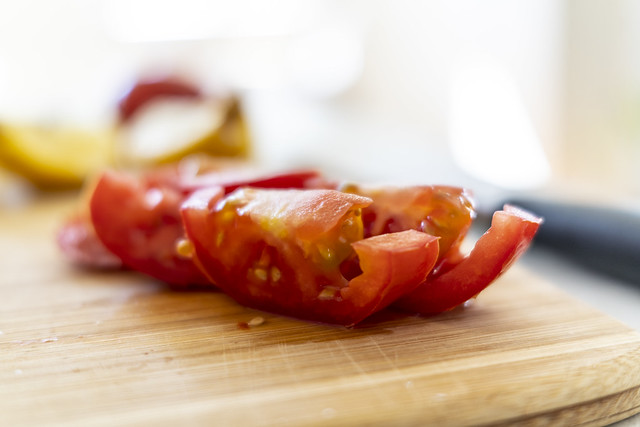 The excellent sample images I saw online were confirmed. Sharpness wide open was just fine. The f/2.8 in no way hindered this lens’ performance in light gathering or bokeh. Any concerns were put to rest once I had the lens.

…and has been the one used the most since since.

So how highly do I regard this combination? Well…

I have stated many times that I really like the Leica Q that I had. Had since sold it due to its limited use case. Have been looking to recreate a similar experience with a small full-frame interchangeable lens combination. First came the Canon EOS RP with the excellent STM RF 35mm f/1.8 (Comparison post here.).

Really liked it but in the end the Canon RF mount did not win me over and I did not want a two mount full frame kit. More recently I devoted a whole tongue in cheek blog post to a wonderful A7c Frankenstein creation. The A7c/Sigma 45mm combination is better than the Franken-Q below.

For me A7c/Sigma 45mm combination is better than the actual Leica Q.

How do I dare make such a bold statement? Easy. Below is the one down side followed by an objective list (Everything loses to Leica subjectively.) of advantages for my purposes.

I dare to say it gives me a bit of the analog shooting experience to boot. I even half jokingly set it to B&W profile for a A7c NOIR (Thank you Omar.)…

…and flipped the back screen around for a frugal man’s Leica M-D experience.

All joking aside this combination is fun to use and it has brought a bit more joy into my life. That is something that does not often come out of the mouth of a mostly stoic, if a bit silly at times, engineer and camera nerd. Also greatly appreciated given current times.

While I did not offer a clear recommendation for my Franken-Q in my last post, I will be much more definitive this time around. If you have an A7c the Sigma 45mm f/2.8 is a must have lens. It suits this camera perfectly.

4 Replies to “Sony A7c and Sigma 45mm f/2.8 DG DN Contemporary Lens: Perfect for each other”