Had what should have been my perfect 50mm-ish lens if you listen to what I say I want in a lens with the Rokinon/Samyang 45mm f/1.8.

I cannot name one single thing technically wrong with this lens. Candid, low light wedding, night and day it did everything asked of it. While initially very happy with the lens I lost interest after a while. Cannot put to words why really. As I stated in a review update:

Update: Yeah… I sold it. Have gone back and bought (re-bought my own copy from the local camera shop) the Rokinon/Samyang 50mm f/1.4. Why? As stated in the post link, “I can offer you no good, logical reason. But I do have a few illogical reasons to offer.”

The only thing I can come up with is that despite the film like quality images it produced it was a bit soulless as a lens itself in operation maybe? I do not know. But what I do know is having bought, sold, and re-bought the (same exact) Rokinon/Samyang 50mm f/1.4 I am not selling that lens again. But I did feel there was still a hole in my lens line up. Portability. I really like the 50mm f/1.4 and the images it produces…

…but it is a bit too large to be a knockabout every day 50mm-ish prime. Small size and weight with a slightly wider focal length was what I liked about the Rokinon/Samyang 45mm f/1.8 but I had no interest in going back there again. There was another lens I test drove once that has remained on my radar since. Photo below of it and from (Excellent photographer Wilson) my first quick test run at SE Camera:

I was immediately drawn to this lens but fought it off because the lens did not make ‘sense’. On paper:

Done deal then? Nope. As mentioned even considering everything above the admittedly very good Rokinon/Samyang did not ‘speak’ to me. So what kept drawing me back to the Sigma 45mm f/2.8? Welp:

The one item left was cost. Based on build, IQ, and aesthetics I believe the Sigma is worth every bit of the $549 asking price brand new. But I did not want to pay that much. It took some patience but I chose to troll KEH weekly to see if one would pop up. Took a while but an EX copy showed up with hood and caps in spitting distance of the Rokinon/Samyang 45mm f/1.8’s price new. 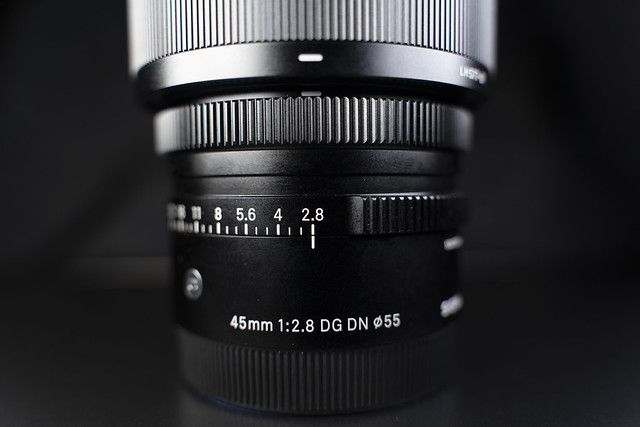 Now that I have it everything I noted above rings true and I can add:

I could go on but I will stop here. Here is an ongoing sample gallery and below are some of the first images.

So do I recommend it? If you have a need or desire for a lens that is…

…then yes. I do not believe you will be disappointed. Because of this lens I am very much looking forward to getting out and adding images to the gallery linked above.

12 Replies to “Sigma 45mm f/2.8 DG DN Contemporary: Occasionally a lens comes along that makes you contradict yourself”