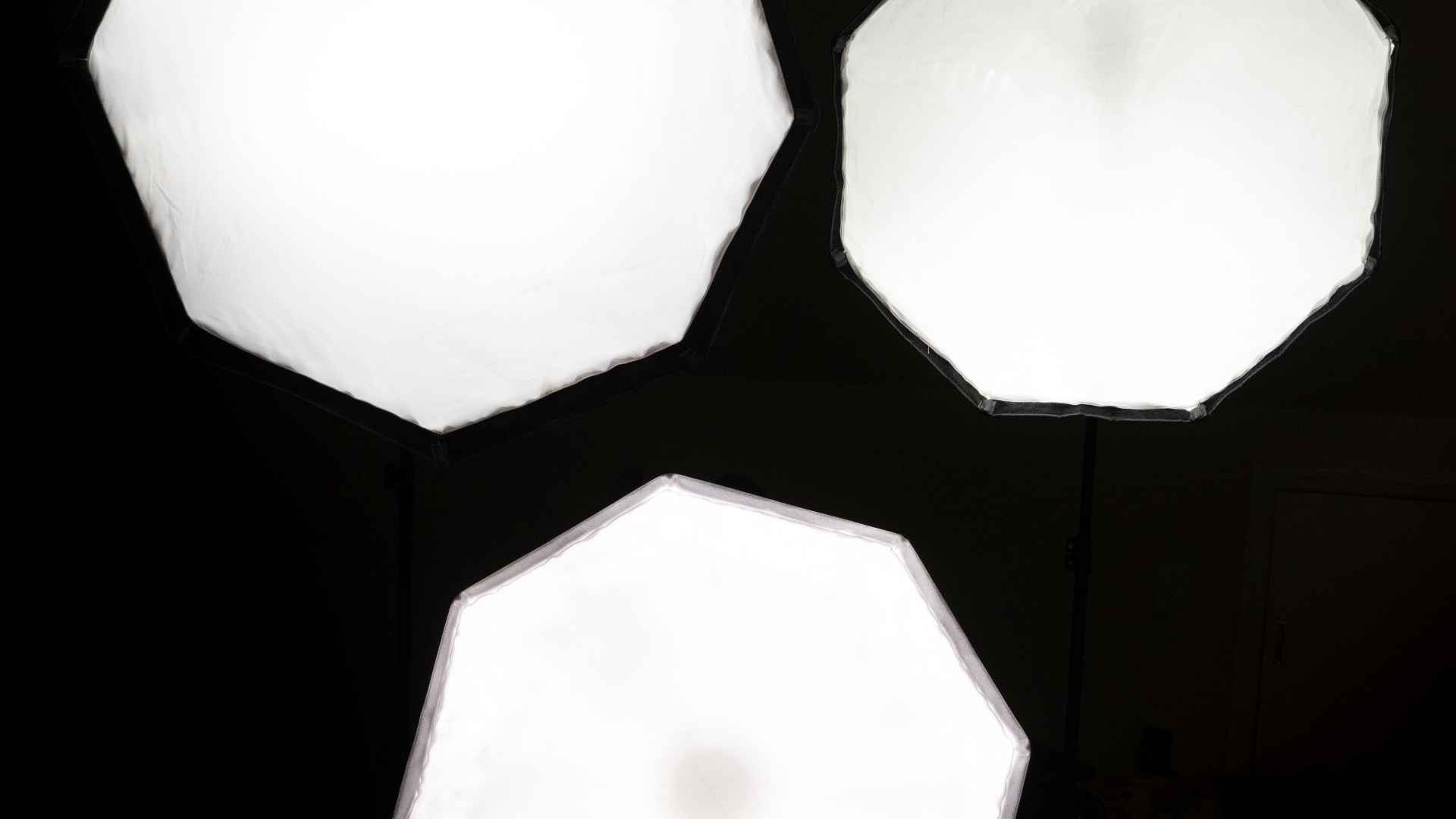 Preface/Disclaimer: I am a lighting newb, neophyte, etc., so on and so forth. Below I will share my experiences but your mileage may vary.

Anything I learned about lighting initially was manual (as dictated by the high cost of TTL flashes at that time) and largely by trial and error (with initial guidance from the strobist to get me started). Had my esteemed and patient model Medicine Ball Von Pumpkinhead (below), some inexpensive non-TTL Yongnuo YN560 Speedlite flashes, a budget Neewer reflective umbrella, and a light meter a few years ago.

With enough practice I felt comfortable enough to shoot out in the wild with this set up and also used what I learned to facilitate a constant light set up for medium format film portraits at a family function.

Fast forward a couple of years and those Yongnuo flashes are gone. There was nothing wrong with them, but Flashpoint née Godox came along and upended everything. With their mix of affordability, brand agnostic universal remote compatibility (Any remote will trigger any flash regardless of on camera system. Any flash can be triggered by buying a remote for as little as $50 and any flash doubles as a trigger.), on and off camera TTL, and cross brand HSS these were the very definition of no brainers. Even wrote a KEH blog review about it…

…after it performed flawlessly at an all night formal event in the before times and never put a foot wrong.

I now use TTL almost exclusively. Set it up. Take a few test shots. Adjust the TTL exposure comp as needed and let it rip. Used it for a local JapanFest shoot in the before times when I ran a Samurai armor booth to help a friend.

That being said I am glad that I learned manual first as it really helps me with getting the results that I want.

So that is it. Flash all sorted. Can stop right there…

Ha ha. Seriously. You know better than that. It never works that way with photography.

So what happened this time?

As shared recently Godox V1/Flashpoint Zoom Li-on X R2 happened. Even better yet they were on sale so I made money right?… Yeah, I know better than that. But I also know that if I passed on the the over $100 off sale price on flashes that are already a great deal, especially when compared to a much more expensive comparable alternative, I would kick myself later.

What does this have to do with softboxes?

I had been using the AD200/XPlor 200 with an octobox/softbox/beauty dish/grid accessory (AD-S7 that seems since discontinued) and the TT350 flashes with either an umbrella or the included dome modifier (for ease of set up/portability).

I cannot continue on using a simple umbrella…

…But I do not want to.). And if I upgrade those flash modifiers I cannot continue on using the Godox AD200/Flashpoint eVOLV 200 with that dinky attachable octobox pictured above in the event set up pic. What am I? A savage? Alright. Overly dramatic. I agree. What next?

A 30″-36”-ish octagonal softbox-ish solution for flash or strobe for less than $50. As is the norm an excessive fit of pricing research and comparisons was next. That is how we reached the three contestants here. One is labeled as a beauty dish but given its sale price I could not pass on it and it proved to be a capable softbox as well though purists may take offense.

An old standard from above was thrown in for comparisons sake with the two new contenders. There are plenty of other perfectly fine options but these are the three I chose.

Shot below was a quick photo with all three set up at the same time.

Spoiler alert. After some quick testing any of these options will do for my purposes. I will leave things like quality and spread of light and such to others more experienced. This newb did not see enough of a difference to sway me one way or the other. Instead I will focus on the setup and use of the flashes in this comparison.

I will go in the order of price out the door regardless of other required accessories (More on that below.).

Fiddly Rating: Assembly, not bad. Disassembly, a few words not found in scripture were uttered.

A very good deal at $27 if you do not plan on taking it apart. With some practice assembly below just took a few minutes.

I would not recommend this unit for break down/transport. The umbrella ends where the rods go into it are padded and fit so snugly that there is almost a pressure fit on top of the tension present. A friend pointed out that some reviews advise against taking it apart. But I am low level (self diagnosed) OCD. If there is a bag it is supposed to come apart. If it should stay together, state such, and do away with the carry bag. I saw where another brand made one umbrella end heavy Velcro to aid in assembly/disassembly. That would help here.

Not bad in isolation. A solid performer but a hard sell given the other options. A solid solution if you are not interested in a Bowens mount and ease of assembly/disassembly is a major concern.

Fiddly Rating: A breeze to assemble/disassemble.

If ease of use, portability, and build quality are your ultimate concerns the Glow is a great option.

All are perfectly acceptable with caveats. This is to be expected with such inexpensive solutions. With Bowens adapters being so affordable the flexibility/adaptability easily justifies the added expense for me, but your mileage may vary. I have tested this model that fits the AD200 and round head units like the V1 and this model that fits the AD200 and a $10 multi flash adapter bracket. Both are great and less than $25 so I would lean to the Godox or Glow options.

At less than $30 regular price for everything including a grid and Bowens mount the Godox is a great choice if you are not planning on taking it apart.

The Neewer unit costs a bit more than the Godox, does not include a grid, and is not as adjustable when assembled, but it is still less than $40, smaller folded, lighter, and is usable with flash components you likely already have and does not require a Bowens mount.

For me the Glow unit is a no brainer on sale for around $40, especially if the free shipping deal is still on, if you prefer a Bowens mount. The best of both options above. It is easy to assemble/disassemble, still fairly compact when folded, mid pack size wise opened (a 40″ model is on sale at the time of this writing for the same price) but still worth it at full price if you can swing it. In fact I picked up another.