I am not sure what Sony did with the A7c but I like it. First let me back up.

I have used Sony’s focus peaking before on previous APS-C and full-frame bodies. While helpful with manual focus for sure, with faster lenses zooming in for critical focus was required if you were to have any hope of getting the intended subject in focus with great certainty. This was common across a few mirrorless brands for me. While I typically do not have many issues focusing wider lenses like the 7Artisans 28mm f/1.4…

…can prove to be more of a challenge.

TECHART Sidebar: Right after “Why on Earth would you shoot w/ third party M Mount lenses?” (Because I like the M Mount lens experience but cannot afford or I am unwilling to spend money on the real deal Leica glass. Because I like to shoot them all with both film and digital. I have nothing to offer above that. Will not even bother trying to explain why I still shoot film as I still fully do not understand that myself.) another question could be “If you have a TECHART AF adapter, or comparable AF native glass while we are at it, why are you manually focusing at all?” Easy one. I simply enjoy doing so. I am glad I have the TECHART when I want the look but do not have the time, but if the occasion allows I would rather focus for myself. It makes the therapeutic exercise of capturing images that little more therapeutic. A nice vacation away from the (appreciated when warranted) nearly point and shoot experience of the best of the breed modern cameras. And we are back in 3, 2, 1…

The case for adapted M Mount and focus peaking

Sidebar: The Q does have AF and it worked better than it had any business doing since it may have been lifted from Panasonic’s MFT parts bin (along with recent full frame Sigma fp) with its similarly spec’d 49 contrast point AF system. But I still spent a good amount of time focusing for myself and that is when I noticed how well the Q’s focus peaking was implemented.

…,and its very good focus peaking, was sufficient for me and paved the way for me to step away from my fascination with obtaining a digital M Mount camera.

All other things being equal (Leica name, build, and lens.) it turns out that I was fine with focus peaking. The real issue was ergonomics. Put more plainly shooting M Mount glass on a faux DSLR form factor was the issue. I have seen many state how well M glass works on Leica’s SL line but that (admittedly great) camera has the same issue for me. At a much lower price point than a digital M the Q offered a similar enough in hand vintage experience to my (previous) Leica M3, (previous) Voigtlander Bessa R2, and (now also previous since this post) Leica CL that the mode of focus took a backseat. The A7c’s upper back, left viewfinder provides a more similar experience in hand to my (film) Leica CL than the A7III.

So with the form factor dealt with on to…

What helped the Q was that the focus peaking was so good that manually focusing was not an issue. As mentioned above I struggled to focus manually with Sony’s focus peaking in the past but I experienced no such issues with the Q. I have no idea why but that was the case. It simply seemed to work better. What was highlighted in red was in focus with the Q when reviewing later. Without zooming in this was often not the case with Sony in the past. Without zooming in for critical focusing shots would too often be slightly off when reviewing later. I understand this can be a concern with a proper Leica M rangefinder as well due either to a long lens with a bright aperture or an out of calibration rangefinder. Have also heard some advise that a Leica Visoflex is recommended for lenses that are more difficult to focus. The advantages made abundantly clear in this older model Visoflex review which acknowledges the advantages of:

If the Visoflex offered focus accuracy like the Leica Q’s focus peaking system I see why it is so highly regarded. I must mention that mounting an EVF to the top of a digital M camera seems counterintuitive ergonomics wise and occupies the hot shoe. The first mimics the faux DSLR issue in my experience with other mirrorless cameras and the second precludes the use of a flash. Neither ideal. It is also quite expensive costing as much as some entry level cameras on its own. One more issue for me is that when not in use you need to keep track of it. Bottom line is that I cannot personally get my head around purchasing an M Mount digital camera for the vintage rangefinder experience and then spending further for an EVF. Your mileage may vary. But now back to the topic of this post.

Up until recently I had not had the greatest focus peaking experience with Sony. Not awful. Just that the Q did it better. Had read in this Sony A7c review that the focus peaking in the A7c was improved over previous models and I took note. Well after a bit of time I can say that I wholeheartedly agree… with a highly respected photography blog staffed with experts in their field. Ok. No big shock. But after often being sold on products based on reviews only to be a bit disappointed in hand I am very happy to see that they were 100% correct. In fact when purchasing the A7c one of the first things I did was mount the most challenging to focus M Mount lens I had, the 7Artisans 75mm f/1.25. I quickly brought it up to my eye before even taking the time to set the IBIS to the correct focal length and focused across the room.

Then swung back around and took another.

Both are shot wide open. Apparently you can change the aperture settings on these lenses I hear. (Only ever happens on film or if digital top shutter speeds do not cut it.) While the second shot was not spot on this was taken on the fly and far better than I would have fared with my previous A7 cameras. After taking care to set the focal length for IBIS and a bit more practice I am very pleased. One caveat. You must use the EVF. Attempting to shoot from the hip using the back screen is not the best. Granted, at least in part, this may also be attributable to the instability of not holding the camera to my face. Sticking with the EVF is much better. And for tougher situations you can still zoom in to assist with critical focus. I mapped the zoom in to focus to the back AF ON button. Here are shots from a quick errand run last weekend.

Alright. Back to where this post started. So what did Sony change with the focus peaking?

Peaking algorithm something math something? I do not know. I am an Industrial Engineer not a magician. But it works. Through the viewfinder there is not much difference in use between the A7c and prior A7 models I used. But light it up red (My peaking color preference over the default white.) and you are good. And (Leica M adherents look away.) for me there are a couple of objective advantages (Everything loses to the M subjectively.) over an M Mount camera. Not of significance to a true M adherent but additional features add flexibility like:

Also thinking this might be a good back up camera for an M owner. Should one ever need to send their M in for repair/calibration or have occasion to use two lenses at once and two Ms are not in the cards the A7c might be a good flexible back up.

In the end an M rangefinder would be nice still. But if I am willing to compromise on lenses then why not the body also? All of the 7Artisans lenses combined cost less than any one of the native alternatives. Have used Voigtlander lenses before (15mm, 40mm, and 50mm) and that is another perfectly good way to go if you are willing to spend a bit more. Money tree in hand native M all day. But back here in reality the A7c will do just fine in the meantime. 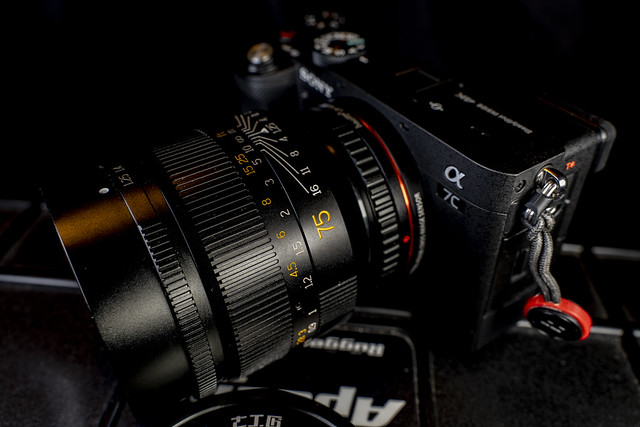